I know Yom Kippur is the time to atone and that confession is more of a Catholic thing, but I have to get something off my chest.

I hate matzo. No, really, I really hate it. I try to get through Passover eating as little of it as possible. I am usually able to make it through with just what I have to nibble on at the seder after we say the blessings. Occasionally, I will take an obligatory serving of someone’s matzo kugel or other such dish that they just love and promise tastes great. I don’t want to be rude. I don’t want to offend. I am willing to try it, but please, matzo is never delicious. I dislike it so much I have considered pretending I am gluten free just for the week so people stop offering me matzo.

I really hate everything with matzo in it. Except maybe matzo balls, I don’t hate matzo balls, but I don’t really love them either. I think it is more that I like the soup than the matzo balls themselves. I will eat them, but I never miss them, crave them, think loving kind thoughts about them. And matzo-brie? Matzo “bread” or “cakes”? NO. They are an unnecessary abomination of food and an assault on my taste buds.

That is my big confession. I hate the main symbolic food of one of my favorite religious holidays. The 4th of July and Thanksgiving being my favorite secular holidays, in case you are curious.

As a baker, I am often tasked (although, admittedly, I happily offer) to bring dessert to most events. During Passover, this can be a challenge. I suppose I should also tell you I don’t love coconut (sorry macaroons) and meringues don’t particularly thrill me, blasphemous I know… this also limits the typical dessert selection at Passover. My goal is to find desserts that don’t taste like matzo, and don’t make me feel like I am just settling for an excuse for dessert.

Last year, I discovered THIS amazing recipe. I almost don’t want to share it with you so that you can only enjoy it if you invite me over…but I will be a better person than that… (begrudgingly). If you make it, watch out, you will be asked to make it again and again. Or you could just have me make it…

This year, I made it again (2 actually), but you remember that cousin that had that sweet little peanut? Well that peanut isn’t much liking when his mommy eats dairy. So whipped cream frosting is out. Even chocolate filling isn’t looking promising. So I decided to make something else that she could enjoy. Oh! and it gets more complicated…her husband, my cousin, his birthday falls on the first night of Passover.  So he obviously needs a birthday cake. A kosher for Passover, dairy free, matzo free, cake. Challenge accepted!

I start researching (yes, that obsessive thing I do more often than I realized). I find all kind of interesting gluten free, dairy free, kosher for passover cakes. This is going to be great. A real baking adventure. I send the cousin his choices. He choses a German Chocolate option. Great! The ingredients are…what is another word for weird and expensive…nonstandard…unique…inventive? I am regretting this choice, but, typical me, I am going to make it work! I lament to a friend, send her the link. She points out it has baking soda. So less than 24 hours before the first seder I need to drop back and punt. Are you kidding me?!

I find a recipe for a chocolate cake. I modify the recipe some. Decide I can use “fake” chocolate, you know that diary free stuff that I suppose I am grateful exists, but I hope to never have to eat it. As I am resigning myself to making a coconut dairy free excuse for frosting, the no-longer-pregnant cousin texts me that she is going to try reintroducing some dairy into her diet. Hurray!! I charge full steam ahead with the most delicious whipped cream frosting I can throw together.

The cake was a success. It didn’t look beautiful, but it sure tasted amazing. I had some for breakfast this morning.

I also made matzo crack. If you are unfamiliar with this, try making it. Matzo crack is a tolerable exception to my no matzo rule (I still don’t usually eat it). Anything covered in that much sugar, butter, and chocolate is going to be edible, maybe even a little yummy.

Next time you are asked to make or bring dessert during Passover, please consider that just because our diets are limited during Pesach, it does not mean that our pallets do not have to suffer. 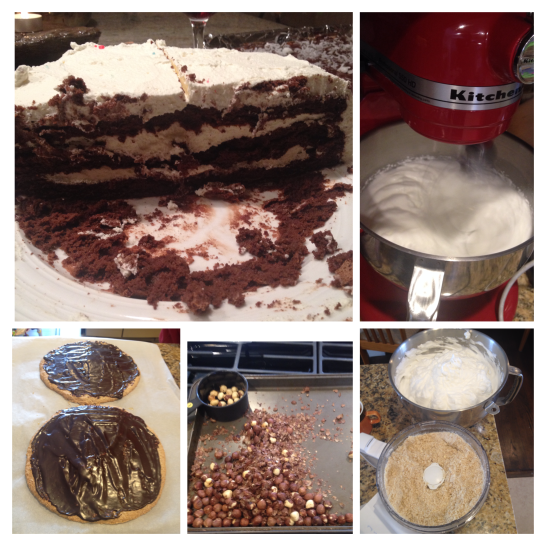 So when I last left you I had the materials and a plan, but no sewing machine. Purim has come and gone, so here is the story of my tutu.

I realized that my next step really needed to involve the acquisition of a sewing machine. Luckily our neighbors have one. They also have a tiny, precious, new baby. Just saying.

After Dad dug the tutu out of the closet and sent me all those great pictures, Mom got home and got involved as well. She measured the width of each gather, the distance between each layer. She measured and wrote down all the information I could possibly need. We video chatted. She offered to mail me my tutu. Dad raced down to get it in the mail, only to find that it was too late to go out that day, and to next-day it would cost over $30. As much as I want to have my tutu here with me, I just couldn’t see spending that much to mail it. Also, I was still determined to make my vision come true.

Thursday afternoon I rushed home from work and picked up the machine. I laid all the netting and tulle out on the floor. I did all the math (which was more difficult that it probably should have been) to adjust the measurements Mom sent from my white tutu to the new tutu. I started to measure. I began to cut. Things were getting exciting.

I made one gather. Hot. Mess. I made another gather. Okay, this one worked.

I have made two gathers, but one will never see the light of day. An hour or two have passed since I walked in with the sewing machine. My cousin isn’t feeling so hot. She is taking a nap on the couch. Now, I have never been pregnant, but I have heard that flu like symptoms can be a sign of labor being imminent. Although at this stage in pregnancy isn’t labor always imminent? I also couldn’t help but notice that when she walked to the couch to lie down she was waddling. Like really waddling (sorry, but you were). This was new; hadn’t happened yet. Something was different.

I came to the conclusion that if labor were to start on this night or even the next there was a very real chance I would be too busy to finish all 10 layers of the tutu. And even if I did finish all the layers, would I have time to sew them on?

If you read my last post, you know how irrationally committed I was to this tutu. But watching the napping pregnant lady, I knew I was far more committed to her, my cousin, the baby, and being part of what I have dubbed “Team Labor and Delivery”, than I was to some costume.

So I folded the netting in half length-wise. Then in half again. I sewed a casing. I measured the elastic and I began to gather all 20 yards of netting.

By the time we went to get frozen yogurt for dinner (hey, who am I to argue with a pregnant lady), I had a tutu. It wasn’t the tutu I had in mind, the one I had been dreaming of, but it was fluffy and it would work.

Friday after work, I added glitter. This happened outside, because that is where glitter belongs. Also, I am pretty sure glitter and spray glue in the house would make most homeowners apoplectic.

The glittery tutu went into a box in the garage.

Saturday night the box was put in the trunk of the car as to avoid getting glitter all over the car.

Standing on Pearl Street, I stepped into my tutu, added the glittery ribbons as streamers and off we went!

The party was a blast. The actual party, not me, I was The Party, but what I mean was the event was great. I think walking around throwing confetti at people and being covered in glitter might be my new calling in life. I am still finding glitter and confetti on and in things that I didn’t even have with me Saturday night, and multiple friends have reported evidence of the party at their house.

And if you were wondering, still no baby. But I do have extra confetti to celebrate his arrival when he does show up.